A downloadable game for Windows, macOS, and Linux

In a land now now consumed by shadow, a soul is awoken with the task of cleansing the usurpers and reclaiming their power.

Delve through dungeons and caves slaying monsters and growing your power.  Find weapons and armour, then tailor your stats to your style of play.  Should you fail, simply try again....and then again.  If you still fail, drain the eminence of your foes until you overwhelm them

UPDATE 01/08/20: Fixed bug with stamina regeneration speed not taking into account frame delta.  Stamina will now always regenerate in about 2 seconds from fatigued.

There were some misplaced wall colliders in D' rendhal Ruins, they are now correctly in place.

Also, minor update.  Exported the Windows and OSX builds with HiDpi setting to see if it helps with blurry text.  If you use HiDpi and notice any difference please let me know!

I absolutely love this game but am not smart enough to beat the skeleton boss. If you make a paid sequel to this, I'd definitely buy it day 1

Thanks, I'm glad you enjoyed it.
From memory, I believe you smack the hands then smack the head/torso.  It is probably woefully imbalanced though as I believe you get overrun by little skeletons if you don't do it quick enough.

I think basically, just farm up until you have stupidly high dps and you'll top it. :)

Either way, thank you for the kind words. I'm looking forward to getting back to this.

Really loved the mix of Shadow Tower and King's Field (which I loved back in the 90's, even when it was super slow, even for that time) with some Soulbourne touch. While the game has it's flaws (I am one of those crazy persons who play with inverted mouse), it is incredible what you brought up. My inner kid was joyful.

I know you are improving your programming skills, and you have passion, you will achieve great thing!

Check out kagero's Deception franchise (every game has a different name) for future ideas that I think you will like to try.

Thank you so much for playing and the kind words.  I'm glad that you managed to find something you enjoyed though it was flawed.  I'll do my best to create a more polished and enjoyable sequel :)

Thanks for the game suggestion too.  I am always looking for games I've missed.  I'll be checking out Kagero's Deception.

Not really enough kind words for a project like this. You know the thing you can improve and some people already gave you feedback, there is no need to state the things already told, instead I want to encourage you to keep trying, becuase the road to succeed has a lot of trial and error, and that sometimes means new ideas where implemented.

I will keep and eye one your work (just please, give me the option to invert the mouse :^)).

Side note: Deception 3 is my favourite, but people like kagero 2 in general. The og (Tecmo's Deception) has a really cool (basic) story that give you chills.

Well it is very much appreciated :)
I will definitely make sure such options as mouse inversion are implemented, I've been ensuring things like key remapping and mouse controls are configurable in my newer games.

Side note noted, looking forward to giving them a go.

This is really cool, I wasn't expecting such a nice blend of Shadow Tower / Soulsborne gameplay, pleasant surprise. It really invokes that feeling very well, while ditching the clunky cameras of ol'. I notice there has been some talk of the stamina, I found it occasionally glitched for no real reason, couldn't pinpoint what was happening really, but occasionally it would bottom out and having to wait for full recovery before use again I feel is a little much, but somebody else mentioned that so I assume you're set on that design.

Also couldn't really work out how to defend correctly? I was trying for different attack timings to parry like a souls game or stagger the enemy without taking damage but alas. If you could add additional damage for back attacks to replicate the souls style instant kills, that would be pretty great.

Some things I think would instantly improve the overall experience, that wouldn't be too difficult, is enemy SFX and an ambient soundscape for each area. It's a very sparse silent game, and there is just something about dead silence that isn't very appealing. You do have great SFX on gates and attack hits and stuff though. I also noticed item descriptions in the menu would remain even after an item was used, so that's a little bug you could probably fix pretty quickly. I also second having the notification/text prompts fade over time, and I really think you should throw some extra healing items around - having every loot find be armor, while useful, made me feel a little disheartened, and I never found enemies dropping loot really happened beyond the first enemy you fight, not sure if that was just bad RNG on my part.

Mostly nitpicks to fill out, amplify the experience. I really loved this, and am excited to see where it goes. Hoping it's still in development.

Thank you so much for the feedback and kind remarks.  The game was unfortunately one that grew well out of expected proportions and quickly became difficult to manage and balance.  This ended up with having various aspects of the gameplay either unpolished or not fully implemented.

I think the issue with stamina was that there was no lower limit cap. So if you were on say 1 stamina and used 90, it would drop all the way to -90.  I wanted to have penalties for using the really high attack weapons but definitely think it was too severe.

Defense was just very wonky.  Also, the enemies have no clear indication of them being staggered upon you successfully defending so make it seem like nothing happens, especially with enemies like the spear skeletons that have very fast attack.

I don't really think there is a single part of your feedback I don't agree with.  I'll be revisiting this series/game in the future.  This is a really rough prototype that outgrew my capabilities but I think I could do a much better sequel or remake.  I've been getting the fantasy itch once more and so revisiting this idea may come after completing my current fps :)

Thanks again for playing and I'm really glad that it was possible to see what I was aiming for through the glitches and dodgey graphics.

Hey this is very nice!

Keep up the good work!

Hey, thanks for checking the game out and the encouragement.  Means a lot  :)

I really screwed up that part, just looking now.  I  will get that fixed.  Thank you for bringing it to my attention!

No problem, happy to help!

I liked it, really liked the aesthetics.

I see the Dark/Demon Souls comparisons of some players, but this really doesnt compare; not because of diffculty, but becasue the clunky stamina mechanic is far too slow. Even with low stamina in a Soulsborne game, you can still attack and defend - being unable to attack or defend even from the worms and bats for 10 seconds while you go all the way back up to 100 stamina (not even just to positive numbers, but all the way to maximum) is not punishing, its poor gameplay.

Thanks for the feedback.  Really was unsure about this myself.  10 seconds sounds like a long time.  I did have some performance issues with the game which affected the stamina regeneration rate.  I wonder if that could also be part of it?  Anyway, thanks again for playing and taking the time to try it out.  Very much a confirmation that I needed to revise how that works.

Edit: Confirmed that the stamina regeneration rate is bugged.  You should be waiting a couple of seconds (generally) at most for full recovery.  Will get this fixed.

Hey thanks for the reply, hopefully I didn't come across too harsh. I really think this has potential, otherwise I wouldn't comment. Keep it up.

Not at all, I appreciate the constructive criticism.  It's really really tough balancing a game when you have little or no one to play test.  You took the time to try it out AND give me some feedback and that is very valuable (most people would just shrug and move on).  This game suffered from scope creep and I lost sight of really refining the core combat/AI.  I'll definitely revisit this in either an update or sequel.

2. I think pop up messages like "essence bound" etc should automatically fade out after a while

Thanks for taking the time to play and let me know your thoughts :)

1. I need to investigate the text stuffs.  Someone mentioned that about my last game.  I'll have to try and reproduce it so it can be fixed. 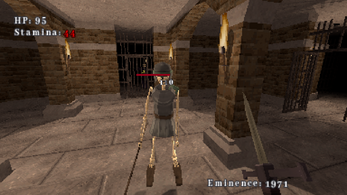 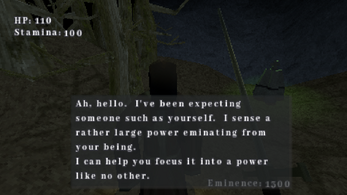 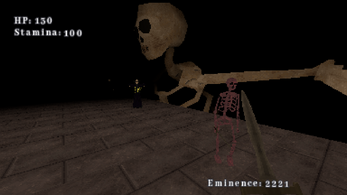 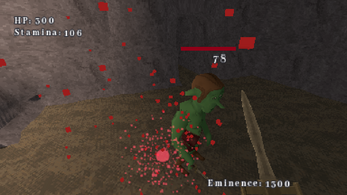 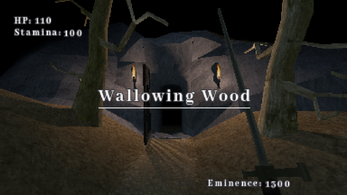